Leiber & Stoller meet Waama
What’s the link between two of the coolest American composers (Leiber & Stoller) and a tiny village (Waama) lost in the Tanzanian jungle? The thing is there was none, until Philippe Decoster of 62 TV, Swimming House Studio and a bunch of cool musicians from all over the globe (actually, mostly from Belgium) got together. Philippe’s idea of paying tribute to his favorite composing duo was met with instant enthusiasm.
The fun of recording their own version of one of the illustrious Leiber & Stoller classics while helping an African village school in pressing need of financial help, motivated no less than 16 amazing bands.

The benefits of the sale of this record are going entirely to the local primary school of Waama, which is very important in this region (Mbulu District, Tanzania) because it’s the only one within a very large radius.

Classics on vinyl!
This album was recorded in the Brussels based Swimming House Studio on a 1 inch tape recorder and mixed on an, also, analogue console: very ‘old school’. Result: a great looking gatefold long-playing record gatefold wich also includes a CD version.


But what’s Waama?
The whole thing started a few years ago when two traveling Belgians were getting a tan on a beach in Zanzibar and met a German nurse sipping a cocktail. He told them about his work as a volunteer in a dispensary in a Tanzanian village (Waama). They were really impressed and decided to visit him there.

Back home they started raising funds for the local dispensary and primary school by organizing a benefit concert (2008) in the marquee of the Brussels Circus School. Girls in Hawaii, The Tellers and Francoiz Breut, donators, sponsors and a consenting public helped raise substantial funds to assist the villagers in extending the dispensary and building modern sanitation infrastructure for the school.

Today things are looking up in Waama but the primary school is still in need of improvement and, therefore, more funds. And that’s where I Can’t Get You Out of My Mind comes in.

Thanks for buying this record and helping Waama.
Enjoy!

Leiber & Stoller, I presume?
On this side of the big puddle Jerry Leiber and Mike Stoller are probably less known then their mythical hits such as Hound Dog, Jail House Rock, On Broadway, Charlie Brown, Stand By Me, Save The Last Dance For Me or Stuck In The Middle With You.
In America they formed one of the most prolific songwriting teams of the early days of rock’n’roll. For over sixty years they relentlessly churned out all time classics and worked with some of the major stars of those days: Big Mama Thornton, Elvis Presley, Peggy Lee, The Beatles, The Coasters, The Drifters,…
In the summer of 2011, Jerry Leiber passed away.

Thanks
A standing ovation for Leiber & Stoller for writing timeless marvels, a big round of applause for all 16 bands wanting to cover them for Waama and for Adriana and her determined sisters.
Special thanks to Françoiz Breut, Uwe Teichert, optimal media GmbH , Laurent Nyssen & Thierry Delporte @pias

2. MUJERES
4 hombres from Barcelona who love to play old music with new shoes.

3. KONOBA
If Konoba was an animal it would be a wild cat: soft and furry, yet sharp and unpredictable.

4. FRANCOIZ BREUT
When Francoiz dived into the sea in Cherbourg, she drifted off to Nantes, washed up on the shores of Dunkerque and finally anchored down in Brussels.
Although this singing siren has found her haven, she keeps on wandering. Her tempting voice resounds as far as Australia, Brazil, Japan and America. When she doesn’t sing soulful songs, she creates her own splashy world illustrating children’s books.

5 THE GODDESSES
Tony Goddess was the leader of the legendary 90's indie pop band PApAs fritAs. With his actual band, The Goddesses, he delivers simply divine songs.

6. JOHNWAYNESHOTME
Operating from an abandoned agricultural bank building in their deserted Dutch home town Ammerzoden, johnwayneshotme used to burn tiny stages across Europe while playing quirky lo-fi popsongs about love, technology and monsters. After a lawsuit with the heirs of the late actor Marion Michael Morrison went dirty, the band mysteriously disappeared in 2006. They temporarily came out of seclusion to record What To Do With Laurie?.

For legal reasons, johnwayneshotme's website is no longer online

8. MALIBU STACY
Malibu Stacy was a Belgian rock band born in 2003 and dead in 2013. This song is the last testimony of their efforts to make Wallonia a better place for all.

9. BED RUGS
Bed Rugs are from Antwerp, taking 'er easy for all us sinners!

11. DOGBOWL
Dogbowl (aka Stephen Tunney) is an artistic octopus: he paints, he writes, he sings, he plays guitar, and moves like a reptile! When he meets up with his Belgian backing band Poney there’s no controlling him…

13. The Tellers
Kings of Bousval Beach.

14. THE VAPORELLAS
The Vaporellas are five ladies who love to let some steam off while making lots of lo-fi noise. This song about 3 cool cats was covered by 3 of them, a guest guitar player, and 1 very cool cat called Greg Rémy from Ghinzu. Result: a pedigreed cat song that will make you purr!

15. THE EXPERIMENTAL TROPIC BLUES BAND
An overheated trio notorious for frantic stage antics and raw blues and rock ‘n’ roll. They’ve shared the stage with The Cramps and their 3rd album, Liquid Love was produced and mixed by Jon Spencer.

16. DEZ MONA
Dez Mona is a band from Antwerp.

Recorded on a 1 inch tape Tascam MSR-24 and mixed on analogue console.
All songs recorded and mixed at Swimming House Studio in Brussels by Stéphane Schrevens, except:

Waama Project
Back to artists 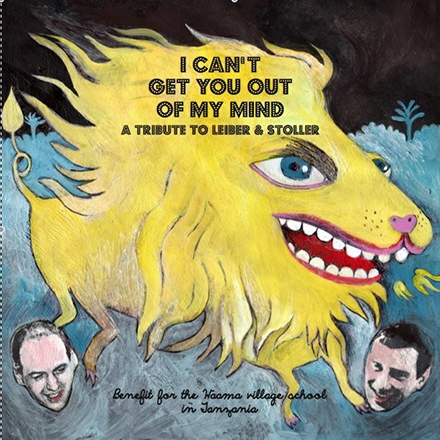